Wokingham is a market town and civil parish in Berkshire in South East England about 39 miles (63 km) west of central London.
Wokingham means 'Wocca's people's home'. Wocca was apparently a Saxon chieftain who would also have owned lands at Wokefield in Berkshire and Woking in Surrey. In Victorian times, the name became corrupted to Oakingham, and consequently the acorn with oak leaves is the town's heraldic charge, granted in the 19th century. 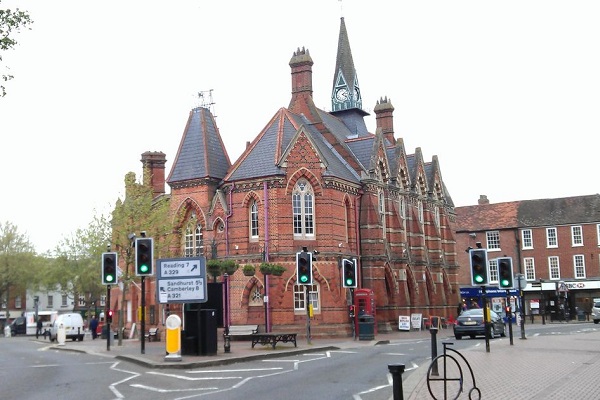 The first written mention of Wokingham was in 1146 and means ‘Homestead of the family or followers of a man called Wocca’. He was probably a Saxon lord who also farmed lands in Wokefield and Woking.
Wokingham received a Market Charter in 1227 which enabled it to hold a market every Tuesday a practice still continued to this day.

In the late 17th century the town was known as Oakingham meaning the “town of the forest” and this is where the acorns on the coat of arms are derived.

It is also reflected in the town motto E Glande Quercus meaning “from the acorn, the oak.”

In 1953 the former Borough of Wokingham was granted the Arms and in 1975 the Queen authorised that they could be used by the Wokingham Town Council.

The Arms consist of a field of acorns on a gold shield representing Wokingham as a forest town, an ermine chevron, a Tudor rose and a Saxon crown representing the Saxon origin of the district.

There is also a stag supporting a bishop´s crozier which refers to the Bishop of Salisbury who owned the land until 1574, when it became a Royal town.